Add Us On GoodReads!

Teen Boat! is the only graphic novel series to combine the angst of being a teen with the thrill of being a boat! From breaking out in barnacles to facing pirates and detention, all the challenges of adolescence are given a nautical twist. Being a teen and being a boat means dealing with a lot of pier pressure!

Dave Roman is the author/illustrator of the Astronaut Academy series and writer of the graphic novels Teen Boat! and Agnes Quill: An Anthology of Mystery. He has contributed stories to Comics Squad: Recess!, Explorer: The Mystery Boxes, Nursery Rhyme Comics, and the upcoming Goosebumps Graphix: Slappy’s Tales of Horror. Roman is a graduate of the School of Visual Arts, has worked as an editor at Nickelodeon Magazine, and lives in Astoria, NY with his wife and fellow comic artist, Raina Telgemeier. His latest project is the all-ages webcomic Starbunny, Inc.

John Green grew up on Long Island and has worked in New York City since graduating from the School of Visual Arts with a degree in graphic design. He was the comics consultant for Disney Adventures magazine and has also worked on comics for Nickelodeon, DreamWorks, Scholastic, DC Comics, and First Second Books. His latest project is Hippopotamister, his first graphic novel as writer and artist. 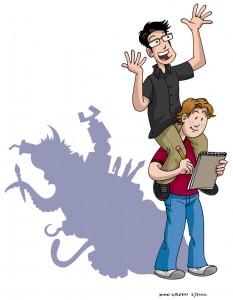 Add Us On GoodReads!